Eternally Artemisia is now available in English as an AudioBook!

I am pleased to announce that my third book set in Italy, “Eternally Artemisia,” in addition to being available in print and ebook formats is now available in English as an AudioBook!

If you like listening to books while you walk or commute this is a perfect way to dive into a novel set in Rome, Val d’Orcia, Florence, and Venice.

I worked with Katherine Madrona, an actress from New York, who read the book complete with accents. It was like making a mini-movie or producing a theater production! It was so much fun and I can’t wait to share it with you!

What the story is about

Eternally Artemisia weaves together a contemporary storyline with one from the past. You will become acquainted with the 17th-century artist Artemisia Gentileschi and the difficulties she overcame, as well as her contributions to the art world. You will also explore the world of art therapy as well as be taken on an adventure where past lives reconnect over and over again.

The AudioBook is available
on Audible, Amazon,
and Apple iBooks.

Synopsis of Eternally Artemisia —
Some loves, like some women, are timeless

They say some loves travel through time and are fated to meet over and over again. For Maddie, an art therapist, who wrestles with the “peculiar feeling” she has lived previous lives and is being called to Italy by voices that have left imprints on her soul, this idea is intriguing. Despite her best efforts, however, proof of this has always eluded her. That is, until one illuminating summer in Italy when Maddie’s previous existences start to bleed through into her current reality. When she is introduced to the Crociani family—a noble clan with ties to the seventeenth-century Medici court that boasts of ancestors with colorful pasts—she finally meets the loves of her life. One is romantic love, and another is a special kind of passion that only women share, strong amongst those who have suffered greatly yet have triumphed despite it. As Maddie’s relationship develops with Artemisia Gentileschi—an artist who in a time when it was unheard of to denounce a man for the crime of rape, did just that—Maddie discovers a kindred spirit and a role model, and just what women are capable of when united together. In a journey that arcs back to biblical days and moves forward in time, Maddie encounters artists, dukes, designers, and movie stars as well as baser and ignoble men. With Artemisia never far from her side, she proves that when we dare to take control of our lives and find the “thing” we are most passionate about, we are limitless and can touch the stars.

Review: by Mary Sheeran on Amazon

Artemisia Gentileschi! My headline says it all. I wrote a master’s thesis on Gentileschi for a theology degree, and so when I came across this title, I thought, this has to be fun. And it was. Not only that, it was filled with feeling, a story that keeps you turning pages, just enjoying the flow. Her historical detail is rich but never takes away from the depth of feeling that keeps you involved in the character – and you never lose track of where/when you are. Beautifully written, both present and past, and actually, some pages drip with irony – oh, I loved it all.

Visit Melissa’s Author Website to Learn
about all Her Books Set in Italy!

Visit the Art of Loving Italy Pinterest Page which is a companion site for all three books set in Italy:
Dreaming Sophia, Waking Isabella (also available in
Italian as Il risveglio di Isabella), and Eternally Artemisia

Leave a Comment. I love hearing from you in English or Italian! Cancel reply 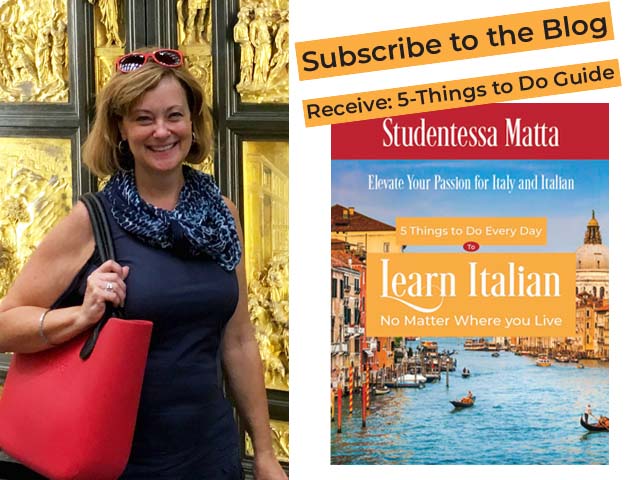 Elisabetta Maccani and I are are back! Living in I

Had so much fun hanging out tonight with this love

Subscribe to the Matta Blog and Receive posts, newsletters and language tips via email.

Your information will *never* be shared or sold to a 3rd party.